Placemat and a King Cake

While I could have made this king cake to celebrate the Epiphany, I waited until Mardi Gras, the end of the king cake season , to make my cake.

We discovered the story of the king cake on a visit to New Orleans and appreciated that a confection could have such a history. And that story extends throughout the western world, whether the cake is baked to celebrate the Three Kings, Carnival or a tailgate party at a Louisiana State football game.

The recipe I used is here. It’s is designed to make cupcake-sized cakes but I decided to use larger panettone containers to bake two medium size king cakes. Traditional southern king cake is similar to a ring of braided cinnamon bread. This one is obviously a different shape (and there’s no doll inside!) but the texture is similar to a cinnamon dough. I gave one cake as a gift. I photographed this one and moments later we ate it.

I just finished painting this placemat (along with three matching designs) on the weekend and felt the design of the mat and the pattern of the sugar on the cake inspired each other. I cut circles from preprimed canvas a little larger than the size of a dinner plate. I wanted to build some visual texture so I applied several layers of monoprinted paint. And I didn’t like it.

Then I found some pieces of crystalline paper I made last summer. These were perfect. The paper, which is tissue paper sloshed with a water/medium/pigment combination, has its own built-in visual and physical texture. Here’s a link to a blog that has a recipe for crystalline papers similar to the steps I followed. When I added color to the white tissue, I made sure to pour two or three different colors onto a single sheet to create an array of colors and values.

For this piece, I re-painted the background with a neutral gray/beige color and, of course, I couldn’t resist adding texture. I mixed a darker version of the background color; added a little matte medium to thin the paint then quickly brushed it over the surface and, before it dried, pressed some crinkled plastic wrap (is there any other kind of plastic wrap??) into the wet surface. Before the glaze dried, I removed the plastic wrap and I was left with streaks and blobs of value changes.

Then I tore pieces of crystalline paper; brushed matte medium onto the placemat; applied the colored paper; then brushed a topcoat of matte medium over the paper to ensure there were no bubbles or risen edges of the tissue. 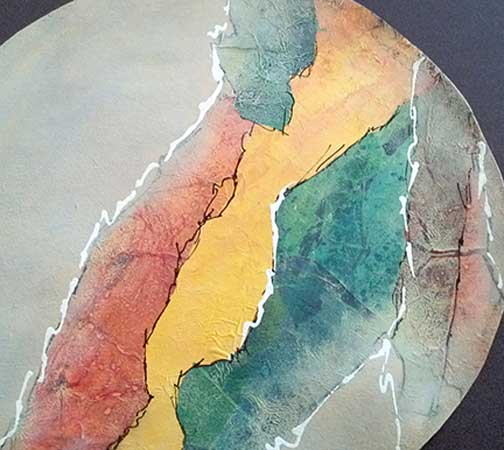 I let it dry overnight then dried some of the background color over top to tone down the color; added lines of black ink and squiggled lines of liquid white acrylic…and I was done.

Top coat with three or four layers of a durable varnish and the placemats are ready to use. Clean with a damp cloth.