Deciding What To Do With The Skins

This painting started with a little texture and whole bunch of random blue acrylic skins. I liked the skins so much that I filled the canvas. That turned the painting ugly.

So I opened a jar of light molding paste and, with a palette knife, spread the paste over most of the canvas leaving only a couple of inches of the blue skins near the top. 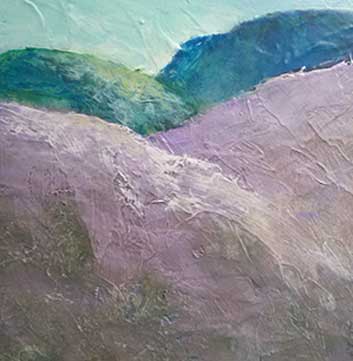 Then, over a period of several days, I used a dry housepainting brush and some analogous color to fill the top and bottom of the canvas. I held the brush almost flat to the surface and lightly scumbled in color to make the most of the textured patterns created in the molding paste.

I switched to a smaller brush to create some of the highlights on the cliff top edge and the background blues and I darkened some the blue areas to create contrast.

Then, after a final toning of the violet, I was done…five days later but happy with the effort.